Regarded as one of the top holiday destinations worldwide, Santorini is simply mesmerizing.
Located in the Cyclades in Greece, it is renowned for the breathtaking views of the volcano, the caldera, the amazing sunsets and the picturesque settlements.

In brief, there are flights from Athens but an alternative way to get there is by ferry. The most popular routes are from Athens and Mykonos but the island is well connected to other ports in the Aegean: Heraklion (Crete), Naxos, Paros, Ios, Milos, Amorgos, Folegandros and many more.

You will find below some of the most popular ferry routes: 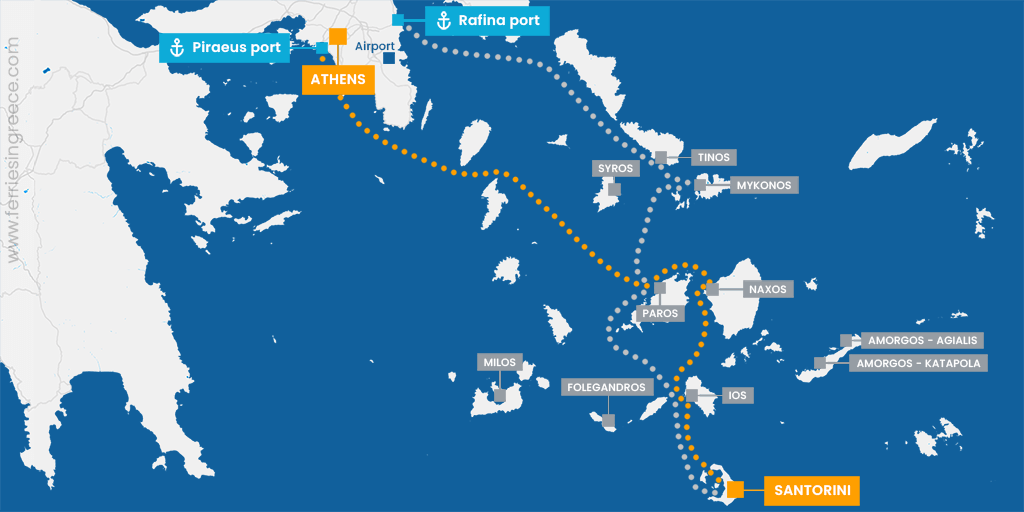 Ferries from Athens depart from Piraeus and Rafina ports. Discover how to get to the 3 ports of Athens from the airport and Athens's center.
• From Piraeus port: The first ferry departs at 7.00 in the morning, while the last ferry departs at 00:00 at night . Some days per week there might also be a schedule at 21.30 in the night.
• From Rafina port: Ferries start to operate in April. There are more than two vessels per day from Rafina in the peak season.
➜ Search for schedules 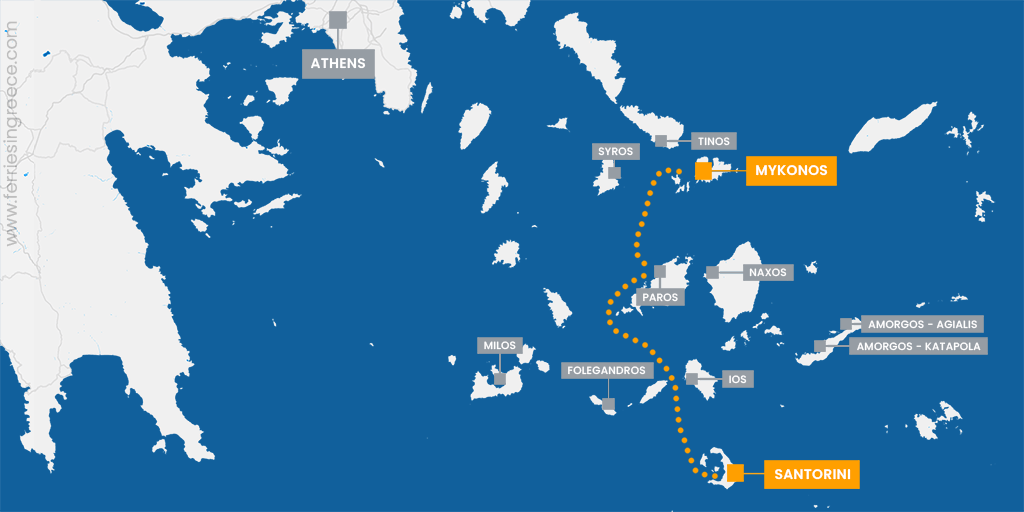 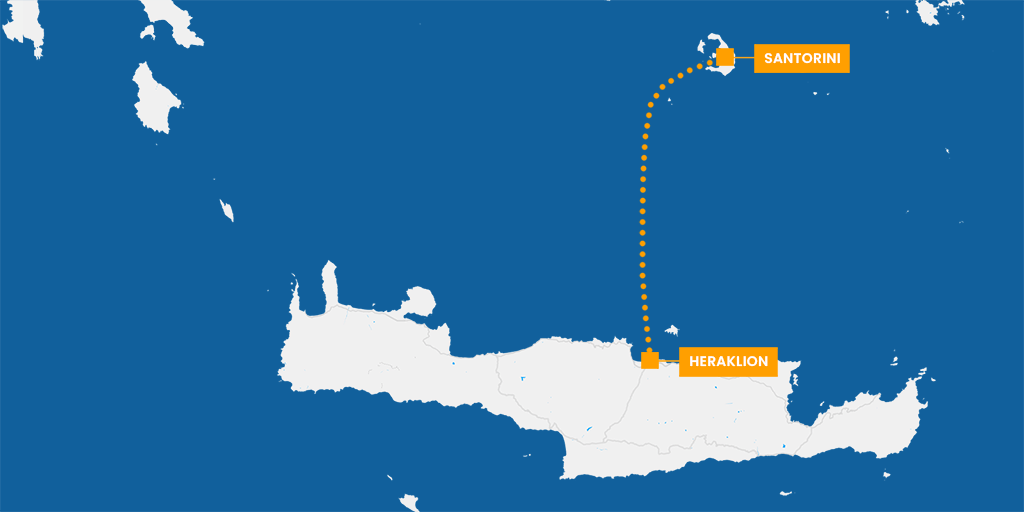 There are catamaran boats from Crete (Heraklion) almost every day in the peak season. The trip from Heraklion lasts for approximately 2 hours and costs approximately '25' 'EUR' (25 Euros)- '70' 'EUR' (70 Euros).
➜ Search for schedules.

There are catamaran boats from Milos almost every day in the peak season.
The trip lasts for approximately 2 hours and costs approximately '75' 'EUR' (75 Euros).
➜ Search for schedules

There are daily high-speed ferries from Amorgos and a weekly local ferry connecting the two islands.
The ferry trip with the high-speed vessel from the port of Katapola in Amorgos to Santorini is a bit more than 1 hour and the ferry ticket costs approximately '70' 'EUR' (70 Euros).
➜ Search for schedules

There is a daily high-speed ferry from Folegandros.
It departs every day at 10.55 am and arrives in Santorini 50 minutes later. The ferry ticket costs approximately '55' 'EUR' (55 Euros).
➜ Search for schedules

What types of ferries travel there?

As far as traveling by ferry from Athens to Santorini is concerned, there are two options: conventional ferries and high-speed/ catamarans. Conventional boats are slower, while high-speed ferries are faster. More specifically, a conventional vessel (slow ferry) will get you there in about 9 hours and a high-speed in about 5 hours. This option (Blue Star Ferries/ Zante Ferries/ Aegeon Pelagos Ferries) is the best if you’re not in a hurry and get seasick easily.
A high-speed vessel (Seajets/ Golden Star Ferries) is a better option if you want to reach your destination faster.

HOW TO BOOK YOUR FERRY TICKETS?

So, forget the often time consuming and complex booking processes and book your tickets!
Don’t lose any time! Your dream holidays are just a click away. Book now and let the adventure begin! 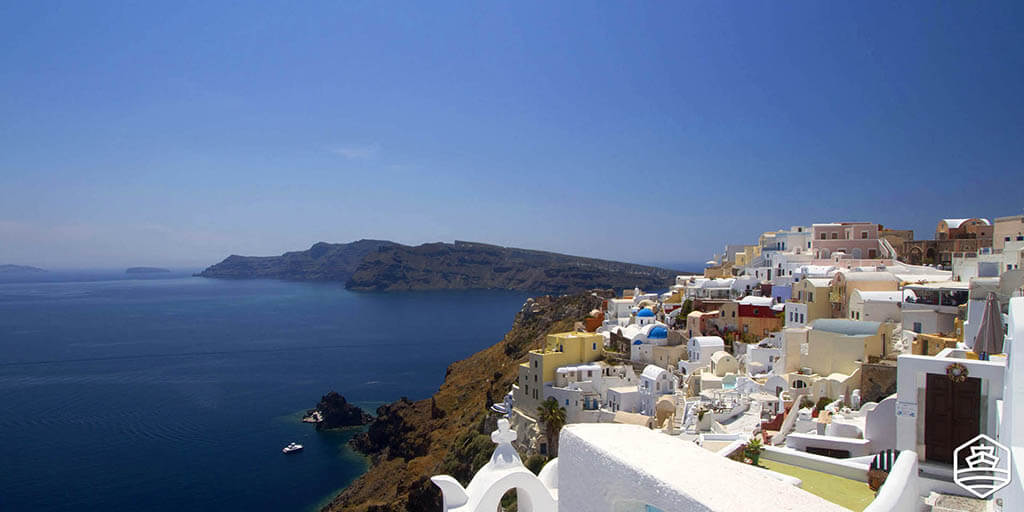 Santorini is worthy known for its volcano and the most romantic sunset in the world.
Situated in the southern side of Cyclades, the island is visited by more than 6 million tourists every year, making it the top Greek island and one of the most favorite destinations in the world.

Also known as Thira, the history of the place is prevailed by an enormous volcanic eruption that happened at about 1,650 B.C. and had serious impact on the Mediterranean basin.
This eruption not only cut the originally round island in many pieces, giving it its present form, but also destroyed the minoan town of Akrotiri covering it in ashes and raised so high tsounami waves that they destroyed the Minoan towns in northern Crete island.

Santorini today is a volcanic complex, which apart from the known cresent island, also includes other uninhabited islets, such as Aspronisi, Nea Kameni and Palea Kameni.
One particularly stunning geographic feature of the island is the breathtaking caldera, which was formed as a result of the volcanic eruption.
With steep cliffs on three sides, this caldera provides breathtaking view of the sea and the volcano.

Inhabited since 3200 BC by the Minoans, it had a rather quiet history in the ancient times.
Its development started in the Medieval Era, when the Venetians conquered the island and made it a commercial and economical centre.
Many Castles and monasteries were built during that period as well as elegant mansions that remain well preserved till today.

Fira and Oia are the most photographed and picturesque villages.
They are built amphitheatrically on the edges of the caldera and give wonderful view of the sea and the sunset. Houses are small and white, roads are narrow and paved, while at every corner you will meet mules.
Mules were the only way of transport till 1979. To enjoy the view even more, have a coffee at the numerous cafeterias with balconies.

Why visit this island?

Connections with other islands 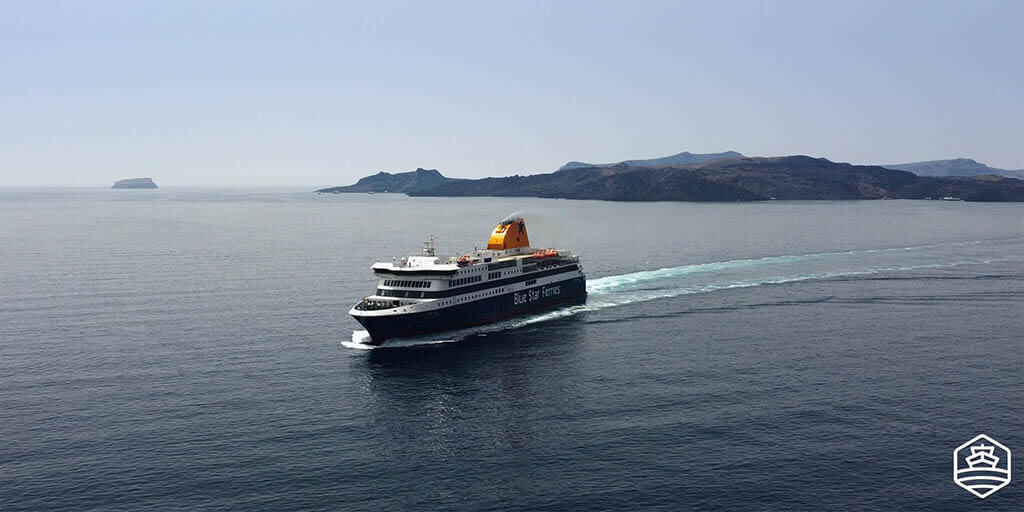 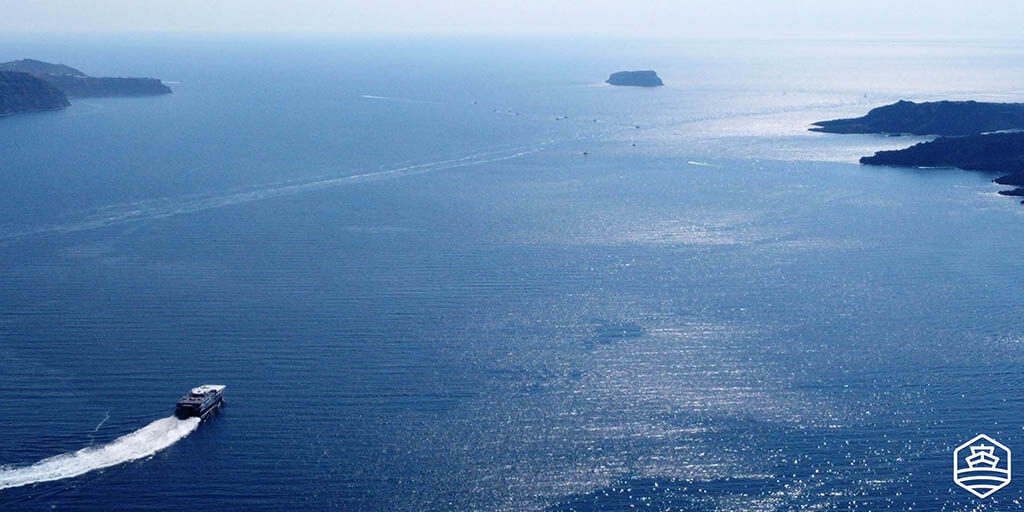 Santorini is the perfect starting point for island hopping! Why?
Because it’s close to some of the most beautiful islands of Cyclades.
Going from Santorini to Mykonos is one of the most popular routes. A trip from to Mykonos lasts around 2 hours and a half and costs approximately between '20' 'EUR' (20 Euro) and '70' 'EUR' (70 Euro).
Going to Crete is another amazing island hopping route!
A regular ticket to Crete costs approximately between '30' 'EUR' (30 Euro) and '50' 'EUR' (50 Euro) and lasts from 2 to 6 hours.
Alternative routes for island hopping are to Naxos, to Paros, to Milos and to Koufonisia.
Whatever route you choose, your island hopping experience will be an unforgettable one! 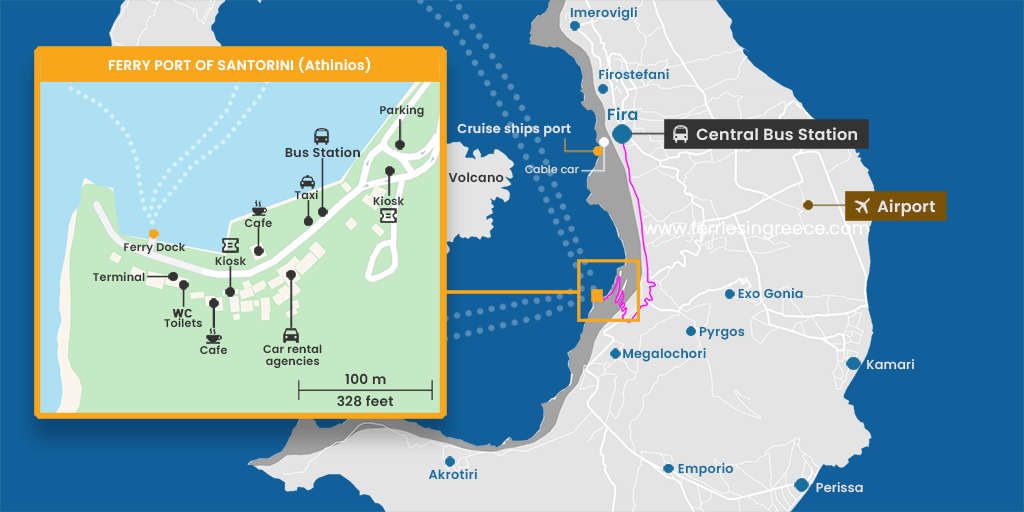 Situated 8 km from Fira, Santorini's capital town, Athinios is the main port of the island which serves all passenger ferries, commercial ships and high-speed vessels.
It is also known as the New Port of Santorini and its location below the volcanic cliffs make it one of the most beautiful ports in the Aegean.

Athinios is connected to Athens (Piraeus and Rafina Ports), Crete (Heraklion and Agios Nikolaos), as well as with many islands of the Cyclades and the Dodecanese.
A waiting area and a few cafeterias are available at the port, while you will also find a car parking area to use free of charge, as well as car rental facilities.

Due to its small size, Athinios port gets very crowded in the high-season months, during the summer.
For this reason, it is highly recommended to have your tickets in hand before going to the port, as the local travel agencies can be very busy.
In addition, because of the fact the port might be serving more than one ferries at the same time, traffic may be increased at the small road of the port and it will require extra time to arrive there. 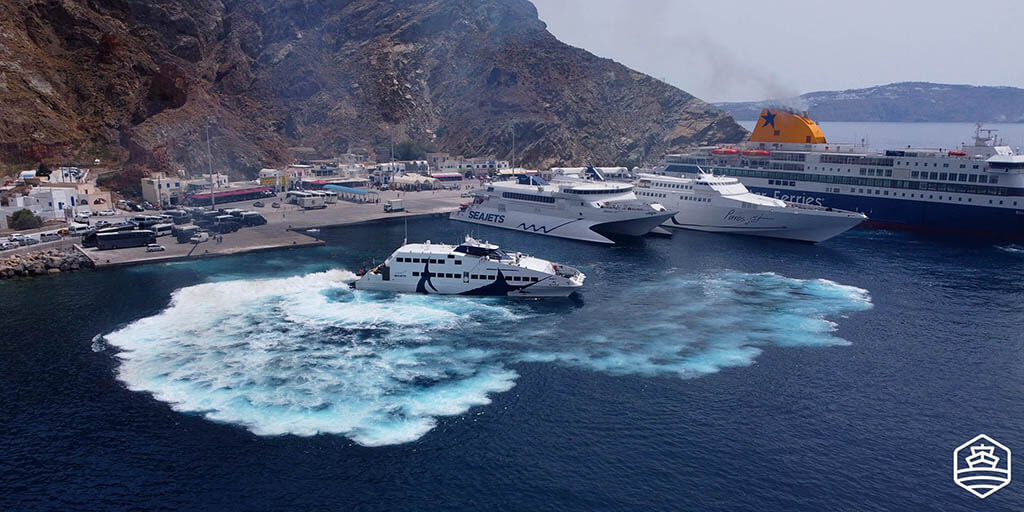 Athinios port is directly connected to the town of Fira and some other western villages (Karterados, Messaria, Vothonas) by public KTEL buses.
Usually, a bus is available at the port after every ferry arrival and the trip to Fira lasts around 20 minutes (8.6 km / 5.3 miles).
You can purchase your ticket from the driver for around '2.3' 'EUR' (2.3 Euro).
To get from the port to any other location and vice versa, you will have to take another bus at the Central Bus Station in Fira.
From there, you will be able to reach Oia, Imerovigli and other popular locations on the northern side of Santorini.

Another way to reach your destination is by taxi. However, it is important to keep in mind that only 25 taxis in total are available on the island.
Getting one may be difficult, especially if you are travelling during the high season. Each taxi can transfer up to 3 people, as well as your luggage and cash is required.

Do you need a pre-order your taxi? Book your transfer with us and our driver will pick you up.

Private transfers are the most reliable way to travel between the port and any other destination in Santorini.
The biggest advantage is being able to book in advance and not having to spend time waiting at the port. Vehicles suitable for larger groups such as minivans are also available.

Alternatively, you may also opt for a car rental and have your vehicle of choice delivered at the port.

Photos of the port

Find all the necessary info regarding our engine's function, as well as our policies on cancellations and amendments.  View
Contact us
{"translations":{"engine":{"default_port_from":"","default_port_to":"","from":"FROM","to":"TO","date":"DATE","passenger":"PASSENGER","passengers":"PASSENGERS","vehicle":"VEHICLE","vehicles":"VEHICLES","loading_message":"Searching for Itineraries"}}}

An error occurred:
Please refresh your browser and try again.
We use cookies to offer you a better browsing experience, analyze site traffic, personalize content, and serve targeted advertisements. You can read our cookies policy and change your settings.